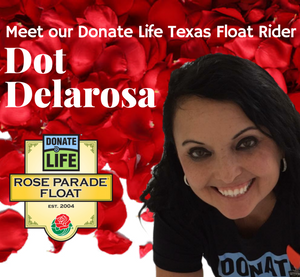 Let’s get to know Dot as she shares her story and how receiving the ultimate gift has made a difference in her life and all those she inspires.

Living Life
Born into a family of ministers, Dorothy “Dot” Delarosa had the heart to serve others. A vibrant young woman, by 36 years-old she had it all: A beloved preacher at her church, success, strong role models, and love. She was well on her way in her mission to make a difference.  Little did she know that soon her faith would be tested.

An Annoying Cough
It was during this time, Delarosa noticed an unusual cough that left her breathless when she spoke. As time passed, family and friends became concerned when they noticed Delarosa struggling to breathe, their persistence prompted her to seek answers from doctors. For years she was told she had asthma, then bronchitis, even with antibiotics, nothing was working! In 2008, it was time to see a lung specialist.

I really didn’t believe that I was sick…that is until one day I was pushing a cart at the grocery store and had to stop, my chest felt tight, I could not breathe.   — Dot Delarosa

The episode led to a visit with a pulmonologist. With X-rays in hand, her doctor said the words no one wants to hear, “You have 2-5 years to live unless you get a transplant.  Without it, you will die.”

In shock, Delarosa did not know what a transplant meant or could understand how a simple cough meant she would die. She went in for a lung biopsy and tests.  What should have been a short stay in the hospital turned to 26 days of surgeries, complications and a near-death experience.

The lung biopsy proved she was suffering from Idiopathic Pulmonary Fibrosis (IFP).  And, her only hope – the gracious gift of a new lung.

The day I met my transplant team, my mom begged with tears in her eyes not to get a transplant because she was afraid I would die. I told her I’m going to die one day, so I might as well die fighting!  — Dot

With her lung capacity at only 25%, Delarosa was ready to fight for her life.  Eighteen months after being diagnosed, on June 7, 2010, Delarosa received the most precious gift ever received from the most generous person. A healthy, new lung.

A New Mission
The transplant was a turning point in her life. Today, Dot remains a minister at her church in San Antonio and serves on the Mayor’s Prayer Counsel, but with her first breath came a new mission to honor her donor, inspire hope to the 11,000 Texans waiting and share about the importance of organ, eye and tissue donation.

Because of this transplant, I LIVE. This gift has given me another day with my family, with my friends, with this world. I have been given TIME.  — Dot

I’ve been given seven years of bonus Life.  In that time, we have signed up hundreds of donors, raised awareness and shared our story to millions of people.  I may be only one person, but there wasn’t a mistake when I was entrusted with this gift. I was given a new purpose to make a difference.  — Dot